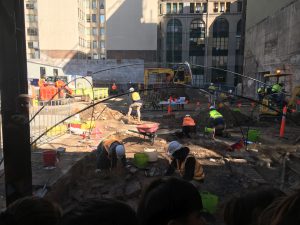 On Tuesday 14 August the grade 5 students went to explore Melbourne’s transport systems. As part of their Inquiry unit this term, they are looking at different innovations so this gave them lots of ideas for their upcoming Challenge Based Learning task. They had the opportunity to visit the Metro Tunnel HQ information centre where they were challenged to think about different innovations they could create; explore sections of the Metro Tunnel worksite where they saw the machinery in action; and were able to watch an archaeological dig. It was really exciting to be able to see the Metro Tunnel in action using the virtual reality goggles. Did you know that in 2031 the area of Brimbank is estimated to have an additional 36,000 people and Melbourne is estimated to have a population of 8 million people by 2051?! That’s a lot of people needing to get around! To get more of an understanding on Melbourne’s history and our transport network they also went on a guided tour around Flinders Street Station. Listening to the ideas behind the building’s design and how much the station has changed as our population has increased was incredible!